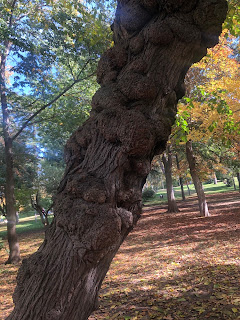 I have grown up hearing about the defects in the woods used in guitars, the knots, the kinks, the veins of irregular tones ... and for me it became something of the most normal until I began to see that wood which appearance was not supposed to be adequate was discarded in the search for an absurd perfection, misunderstood, wood that was beautiful with its spots and irregularities, wood that once put on a guitar sounded good, so good and sometimes even better than others which appearance was homogeneous and, if you rush me, even boring. My father started to use that wood for guitars that he called second class (noted on the label as 2ª), although the construction quality was the same as the ones of 1st class, but he knew that many customers were going to object to the appearance of the woos. And later we have done the same again because a supposed aesthetic defect cannot be above the sound quality.

In the search for the pristine and, at the same time, the imperishable, the immortal ... all so alien to nature, we have been destroying our world, indiscriminately cutting down trees and using a small part of them considering the rest as waste material. Something similar to the manufacture of plastics, perfect, indestructible ... For me these are processes that go hand in hand in a denial of the natural. Of course, we are not going to accept wood with cracks or knots that can become holes, all of which is unacceptable to build a guitar, it is obvious. But the so-called defects of the wood are actually peculiarities produced by nature, the capricious nature that loves unique, unrepeatable, singular shapes. Just as there are no two identical fingerprints, neither are two trees alike. Even the wood of the same tree acquires different shapes in each piece, because it is life passing through its veins and rings, and because one moment is never the same as the next, and this is engraved in the experience of the tree.

I don't like having to use wood to build our guitars, and it only comforts me to know that their life will continue as music on instruments as different from each other as their wood, because despite the fact that the construction of a guitar is identical to that of its task sister (we usually do them, traditionally, four by four), each one will have a different sound, even if the soul is the same. Yes, the soul, the soul of the trees that participate in its elaboration together with the soul that we put in them during their construction, adding the soul with which the guitarist permeates its grain.

My father (JR III) used to speak with great sadness about the mistreatment suffered by the Brazilian rosewood, about the abuse of its felling out of all control, being the victim of an absolute lack of protection. In his book “Things about the Guitar" he comments: "One day talking with a Brazilian logger, I learned that there were many loggers who, because they did not bother to use the saw or the ax to fell a rosewood tree, followed the simple procedure of making a hole in the base of the trunk, place an explosive charge and the thing was solved with the greatest comfort. Naturally, the explosion produced unnecessary cracks along the entire length of the trunk, which significantly reduced its use, but this did not matter, there were many trees ”. And another anecdote that he often told us recalling his father José Ramirez II, and which he also exposes in his book, could not be more descriptive about the contempt with which wood, our forests, our trees are treated: “My father who, on one of his trips, was in Rio de Janeiro for several days in 1925 and who, walking through the city and contemplating how they were paving a street, saw something that in his first sensation he considered to be a false impression of the senses, but no, it was an incredible reality: the fire in the boilers to melt the material was fueled by pieces of the most splendid dalbergia nigra cut out of amazing planks. He immediately got in touch with the construction contractor with whom he soon sympathized with the help of a few drinks and proposed the purchase of those wonderful planks. The contractor, who must already be in the ineffable stage of friendship protests, promised that he would send to Spain not only those planks that were worth nothing to him, but some more and given away. My father insisted on paying it to seriously compromise what he saw as doubtful. The contractor was even offended by doubting his <<sincere>> friendly offer. My father, may he be in glory, is still waiting for the boards “

Fortunately, now there are logging companies that take care of the environment, that work responsibly, that replant and ensure the continuity of the species, and that is a blessing that has fallen on us, guitar makers. And it would be good if we learned to consciously thank the trees, the precious trees, that we can use their precious woods, with their unique peculiarities, to be able to carry out our work.
And in this context, one might wonder if the loved one is less beautiful because he or she has a mole, a stain, a scar ...
Long ago we learned to appreciate the beauty of the imperfect, so without going any further, we like ebony with lighter veins or with color changes, because these irregularities are part of its nature, they do not harm the aesthetics or the sound or the quality of the wood, on the contrary it beautifies it, so it does not have to be totally black to be valuable and worthy of the best guitar. Many builders of acoustic guitars, as well as electric guitars, for example, use the peculiarities of the woods as part of the design, such as knots and claws, the latter being favorable for the sound. There are some who do not like the run out on the tops, when it occurs when a log is opened in favor of the grain and not through it when sawing. And the run out gives a special consistency to the covers, and also benefits the sound. For this reason, wood that has been extracted from logs that have been split with a wedge, following the direction of the grain, is more advisable.
And yes, whatever the aesthetics of the wood, what is essential is that it es well cured over the years, which not only affects the quality of the sound, but also the stability of the instrument, avoiding movements that may produce cracks and flakes, shrinkage and dilations. And of course natural aging is always preferable, although artificially accelerated drying in dryers is also acceptable, but it is preferable to leave its drying in the hands of the passage of time in a suitable environment. Thus, my father bought a significant amount of wood between the 50s and 70s that we have kept in our warehouse in suitable conditions for natural drying. Even today we continue to use that wood as we buy other to undergo the same aging process and be able to use them in future guitars.
Those 2nd class guitars that my father made in his day to use the wood that rebelled by exhibiting the beauty of its imperfections, it turned out that a clever merchant, whose name is irrelevant to mention, has been selling them as if they were better than those of 1st class and therefore with a overpricing, when he bought them with a discount because they were 2nd class. This should help us to understand the nonsense of the canons of beauty by which we so often and so absurdly guide ourselves.
Now that we are beginning to become aware of the damage that, with so much perseverance, we have been causing to nature, the concept of the imperfect is also changing, fortunately for all. Understanding that there is no imperfect wood is a fundamental step in this process. We are on the way to developing a line of guitars with wood with“peculiarities" that we refuse to discard, and we are sure that many will be proud to have one of these guitars as a musical companion for day to day. Do you join the challenge?
Madrid 21 de octubre de 2020
Amalia Ramirez
Publicado por tienda ramirez en 16:44 No hay comentarios: