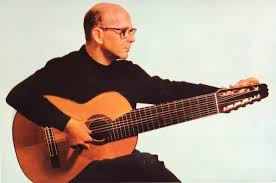 It is not the first time that authorship of a creation is attributed to people who have had nothing to do with it, as is the case with the 10-string guitar. And as lately, and through different channels, I have received the information that some believe that this guitar was devised and designed by Paulino Bernabé, and I have found out this because it has been disseminated in various media, so I have decided to clarify this matter.

I will start by saying that Paulino Bernabé I, as is well known in the guitar scene, was a disciple of my father José Ramírez III, and ended up being in charge of his workshop until he became independent in 1969, obtaining a well-deserved prestige as a guitar maker. But he was not the creator of the 10-string guitar, and had nothing to do with its creation process. What's more, he never attributed his authorship or his participation in said process, although it is true that, like other guitar makers did, he built his own version of this instrument created by my father, José Ramírez III, with the collaboration of Narciso Yepes , who was enthusiastic about my father's idea and was very commited to contributing his valuable ideas as a guitarist.

In 1963 my father started to think about creating a 10-string guitar, inspired by the viola d'amore, with its inner strings that provide a charming and magical sound, so he built a 6-string guitar with another 6 additional strings inside that were tuned by a double tuning machine.

ey spent together in the master’s studio drinking whisky and enjoying their long conversations about this and that ... and one afternoon he took the experiment to Andrés Segovia, who loved the sound, but had a problem, because the inner strings did not stop sounding while he continued playing, which created a considerable musical dis-concert. He asked him to bring it back to him so he could test it when he resolved that problem.

So, my father's next step was to discuss his idea with Narciso Yepes, and the disappointing result obtained with his first prototype. He turned to him because, in addition to being a great guitarist, he considered him to be quite a rational man, open-minded and somewhat adventurous, and Yepes was very enthusiastic about the idea to the point that they worked together for several years until they achieved something that  finally satisfied both of them, and it was thanks to a call from Yepes to my father telling him to simply add four strings on the fingerboard, since that would allow him to silence them when necessary with the right hand. The design, as my father explains in his book “Things about the guitar”, was easy, the complicated thing came with its construction, since it needed a bridge strong enough to withstand the tension of 10 strings. And he did it. And Narciso Yepes popularized this instrument all over the world, devised a tuning system  for the additional 4 strings, and got string makers to make the necessary strings for this guitar.

Since this guitar became quite popular then, there were many guitarists who followed  Yepes's footsteps learning to play this instrument, and other guitar makers built their own 10-string guitars, one of which was the one by Bernabé, and which also Yepes played for a long time in his concerts.

As for Andrés Segovia, when he saw a guitar with a fingerboard so wide that it distorted, in his opinion, the harmonious and balanced forms of this instrument that he loved so much, he chose not to want to know anything else about the subject, so in the visits my father made to his studio in Concha Espina, enjoying a good a whisky and an always interesting and rich topic of conversation, the 10-string guitar never had a place again.

It is true that, after the death of Narciso Yepes, little by little the 10-string guitar was losing the interest of the guitarists, and currently there are few who still play this instrument. Sometimes they make orders for us, but they are becoming very scarce. On the one hand, it is a shame, because it is a very enriching instrument, since the 4 extra strings add a richness and depth to the sound that the 6-string guitar does not provide.